We are celebrating our 5th year anniversary of our US Medicare Philippines campaign and progress.

We had effective advocacy activities in the US & the Philippines:

1)  We successfully lobbied Tourism Usec. Benito Bengzon and Tourism Asec. Shalimar Tamano, Trade BOI USec. Ceferino Rodolfo and Health Director Melissa Guerrero MD to prioritize US Medicare coverage for our balikbayan seniors and expats. Results: it is now part of the bilateral official negotiations between the US and PH governments, and to be included in the Medical Tourism & Retirement Industry Road Map for PH President Rodrigo Duterte and Tourism Secretary Wanda TEO.

2)  We were covered by Bloomberg TV news channel on the crucial support of the influential American Chamber of Commerce of the Philippines. See March 7, 2016 Youtube video.

3)  We obtained commitments from the PH senate and House committees on tourism and health to reintroduce our bills in early 2017 to promote medical tourism with the Medicare feasibility study.

We met in March with Ms. Lourdes Sanchez and Ms. Marilou Fernando, staff secretaries of the PH congress House Health and Tourism committees.

We stressed to them that feasibility study is necessary to persuade US Medicare Advantage insurance companies to invest and provide long term full coverage for American retirees there. We need to build their confidence in doing business with the top PH hospitals and their doctors.

4)  We visited two Iloilo hospitals in (The Medical City & Guimaras' provincial) in March and four Davao City hospitals in July to assess their emergency room capabilities and facilities for our balikbayans & tourists, thanks to hospitality of Tess Taylor & Ludy Resurreccion respectively.

​    Medicare coverage in the PH is the major concern of 400,000 Americans residing in the PH and  balikbayan seniors.

The PH healthcare industry study would show the data of past years’ cost savings and the excellent quality of care provided to ten thousand US military retirees in the TRICARE PH program and the 30,000 Guam Medicare American beneficiaries treated at the top PH hospitals at negotiated prices.  Join our campaign! 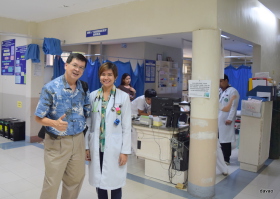 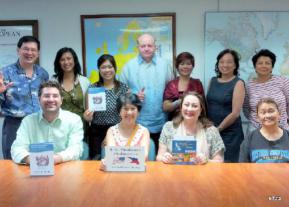 JANUARY 16, 2014 - MANILA - The leaders of the Washington-based advocacy organization, US Medicare PH, launched their 2014 campaign during the First Global Nurses Summit at the Manila Hotel with their Philippine-based partners. The event was attended by more than 300 nurses and supporters.

"We appealed to the nurse leaders and our partners to renew their commitment to cause of Medicare Portability for thousands of returning elderly Filipino Americans by ensuring high quality health standards and by keeping low medical costs in the homeland," said Eric Lachica, organizer of the US Medicare PH, and a speaker at the summit.

"We urged them to persuade US Medicare Advantage insurance companies to provide full emergency coverage for our retirees here and to build confidence in doing business with the top PH hospitals and their doctors," Lachica added.
The leaders later consulted and strategized with the Retirement & Healthcare Coalition (www.rhc.com.ph), formed by the four influential foreign chambers of commerce (American, European, Japanese and Korean).

Marc Daubenbuechel, the RHC executive director, reviewed their strategy and actions to improve the healthcare, to protect the interests of retirees and visitors with the help of relevant PH government agencies. He explained RHC benefits to retiree members: health, wellness, travel insurance, visa and transportation assistance. 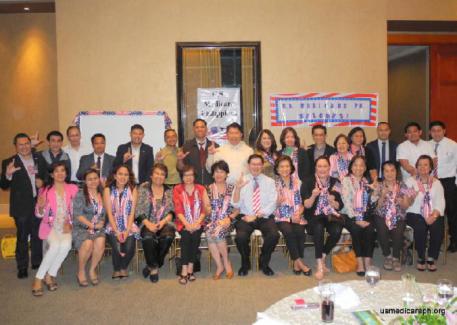 The Medicare PH group visited on February 4 and consulted the new US Ambassador Philip Goldberg and his economics affairs counselor in the US Embassy on Roxas Blvd on February 4.

They discussed the challenges and prospects of extending long-term Medicare coverage to US citizens who visit and retire in the PH.

The advocates stressed to the Ambassador their 2014 goal to obtain a PH healthcare industry study of the past year's cost savings experience and the quality of care provided to tens of thousands of US military retirees in TRICARE PH program and the 30,000 Guam Medicare American beneficiaries who can be treated at top PH hospitals at negotiated low charges.

If Tricare and Medicare federal benefits are good for them, why not for them on the US mainland, they asked.

They further explained that Medicare will be facing cuts of spending in the range of two to five billion dollars per month, according to Congressional Budget Office.

A billion dollars of Medicare expenses could be initially saved if 200,000 Filipino Americans seniors were to choose to retire and be covered in the PH as compared to if they resided in the US, the group estimated.

The anticipated results of the study would build the confidence of insurance companies paid by Medicare like United Healthcare, Carefirst, Kaiser, Humana, Molina, Blue Cross, Aetna and others to do business with the top PH hospitals and their doctors to realize tremendous savings.

The ambassador and his counselor expressed great interest in this issue since Medicare coverage in the PH was major concern of the estimated 400,000 Americans residing in the PH. They made several suggestions to the FilAm group, including discussing this with members of the US congress. 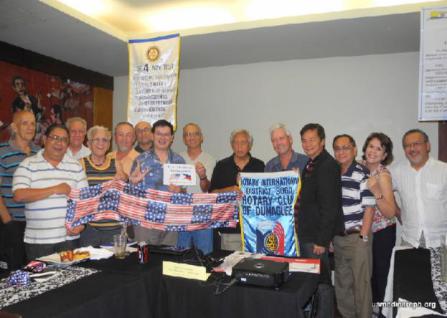 DUMAGUETE ROTARY & US EXPATS
The FilAm leaders visited stakeholders in Cebu Chong Hua, Doctors, Iloilo and Dumaguete hospitals. They organized a key meeting with their partners in Manila to begin their updated health industry study of cost savings and business feasibility.

JANUARY 2013 New Year Greetings. We can look forward to a bright and promising year for the US Medicare PH campaign. Economic and political factors are in our favor.

During these past weeks, we met with our enthusiastic partners and leaders in California and Nevada. 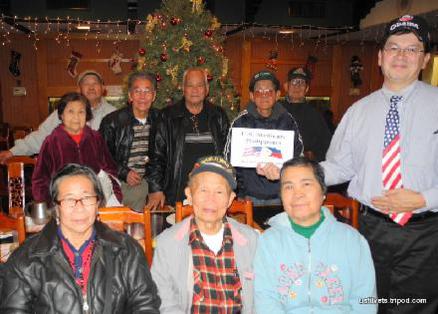 Filipino veterans led by Mr. Ernesto Anolin in Delano
In Los Angeles, we partnered with United Physicians International, Inc., a group of 30 doctors led by Dr. Rene Lim, a UST Medical graduate, who hails from Iloilo. His group now offers primary care services in Los Angeles and IN THE PHILIPPINES for Medicare and Medical (Medicaid) limited to Los Angeles area patients. It is under an innovative program with Easy Choice, one of the large health insurance companies in the state. They are also a partner with The Medical City Hospital, a world-class hospital institution, headed by Dr. Alran Bengzon. UPI affiliated doctors in the PH provide 3-6 months of urgent medically necessary care there. Lim joined as a founding member. Their website is www.upihealth.info. 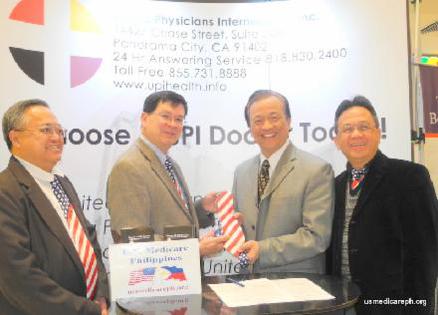 Above is a photo of our partnership signing with Dr. Lim of UPI and witnessed by Atty. Ramon Ocampo, our founding member and Louie Laguitao, a representative of the PH Seniors' Party at the UPI booth at the Eagle Rock Filipino mall.

We also participated in induction dinner meeting with the leaders of the L.A. Overseas Filipinos for Good Governance led by businessman Romy Baylon and Ms. Andrea Aquino, a nutritionist and a charter member of our organization.

Mr. Benito Miranda of United Healthcare Medicare Solutions (www.uhc.com) represents the largest medical insurance (Medicare Advantage & AARP sponsored) company in the United States. He reviewed with us his efforts over the past year to promote his company's UNLIMITED coverage for Medicare and Medicaid members who temporarily visit the PH. His company now handles the U.S. military TRICARE insurance plans nationwide. We were joined by Louie Laguitao of CA Home Health and Dr. Mariedel Leviste.

In Las Vegas, we met Philippine Medical Association Nevada officers Dr. Ben Calderon and Dr. Tess Melocoton. We discussed a partnership to promote joint projects with their 200 physician members. Calderon is a De La Salle Medical School graduate and practices primary medicine. Calderon has an innovative Las Vegas-based project www.FilipinoMedConnect.com to link thousands physicians in the Philippines to serve Filipino Americans and OFW patients when they return or visit. They are very interested in promoting our mutually beneficial proposal.

YES.We can win by building a winning coalition with our can-do partners. 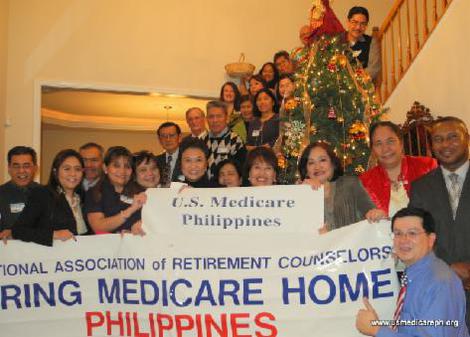 CLICK for video of our Q&A w/ PH President Aquino at the January 26 Joint Foreign Chambers of Commerce luncheon in Manila on his assurance to request Medicare coverage for Filipino American retirees in the top PH hospitals from President Obama when they meet in June 2012: 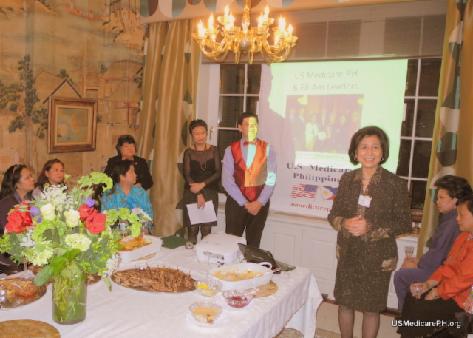 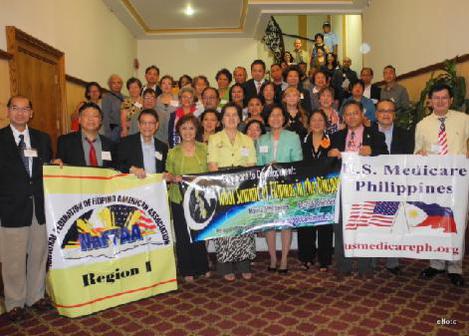